Get fresh music recommendations delivered to your inbox every Friday.

N30: Live at the World Trade Organization Protest (SOLD OUT) 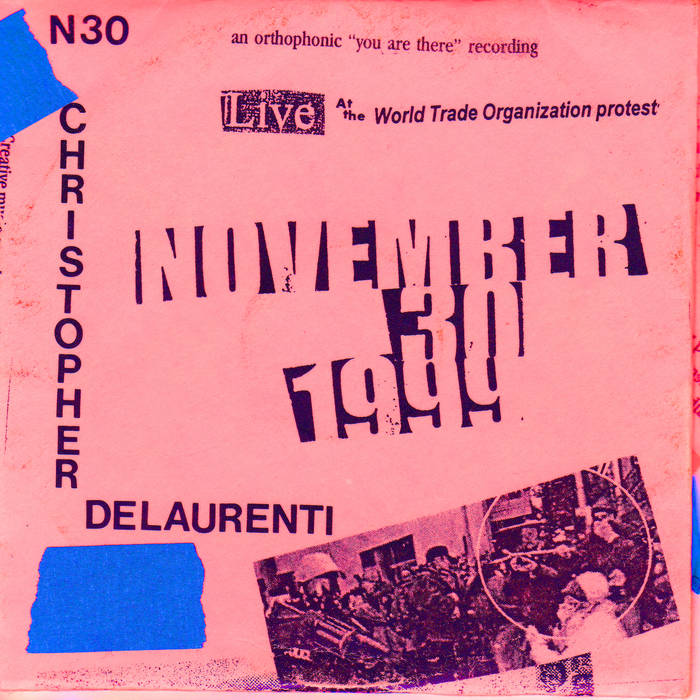 This two disc set reissues Christopher DeLaurenti's acclaimed N30: Live at the WTO Protest November 30, 1999, whose high-fidelity field recordings capture and condense the tumultuous events of that day into an unprecedented work of symphonic breadth.
The double edition also marks the first release outside Seattle of its sequel, N30: Who guards the Guardians? This 56 minute work fuses official and unofficial recordings of police transmissions made on November 30, 1999.

"N30 is "an orthophonic 'you are there' recording" of the World Trade Organization protests in Seattle, Washington in the fall of 1999. This hour-long recording takes up the bulk of the CD's length, with the first two tracks consisting of earlier, experimental recordings by DeLaurenti. Those two, "Cocaine" and "Harbinger" serve as an introduction to the type of artistic work DeLaurenti is interested in. Namely, in taking sounds and making art out of them. "Cocaine" takes drug-related vocal samples, from people talking about drugs to selling drugs, etc., and splices them together to give a quick audio history of the U.S.' disastrous, duplicitous "war on drugs." "Harbinger" uses sounds for more conventionally musical purposes, forming them into a atmospheric, building composition that sounds rather Philip Glass-ish. On "N30," listeners are immediately thrown into the middle of history. For this piece, DeLaurenti made field recordings at the WTO protests and then edited them into a composition. Still, it sounds more like field work than manipulation. You hear activists speaking, gathering, chanting, playing drums, and then police trying to "maintain order," police and protesters clashing, and so on. Plus street noise, traffic, bypassers and other sounds of the environment. If you didn't believe John Cage, Brian Eno, et. al, here is more proof that the sounds around us are themselves music. Listen to this more than once and you'll be remembering, "This is where the car horn comes in, and then the people chant," and so on. There are repeating choruses via the protestor's chants ("there ain't no power like the power of the people cause the power of the people don't stop"), and via scenarios and ideas coming around and back again. "N30" is part historical document, part musical composition using nontraditional instrumentation, part evidence to the importance of the event, and always riveting."
--dave heaton, erasing clouds

"November 30, 1999: Christopher DeLaurenti was down in the streets of Seattle, microphone in hand, to document the World Trade Organization protest. Later he edited his high-quality recordings into an hourlong piece of audio vérité. The work flows seamlessly, condensing the events of the day into something more than a narrative. DeLaurenti doesn't develop a story, no character is named, and he doesn't stick to a specific group of protesters or ask them to comment on the situation. The microphone captures what happens in its vicinity; the story develops itself. The exuberant crowd chants and percussion jams early in the day are interrupted by the police forces taking action against the protesters, and the piece ends on a vocal lament from a group of participants mourning the death of democracy (well, that's surely one way to interpret both the events and DeLaurenti's piece). The work first came out in late 2000 on the album N30: Live at the World Trade Organization Protest , rounded up with two unrelated works. In November 2003, DeLaurenti reissued this album as a two-CD set. The second disc adopts the same format: one hourlong piece and two shorter addenda. "N30: Who Guards the Guardians?" reverses the point of view. After showing the protest from the protesters' standpoint, the composer now gathers official and unofficial recordings of police transmissions from November 30, once again letting the documents speak for themselves — speak of how unprepared police forces were and how amateurishly (and humanly) they reacted to the situation. In both of these long pieces, it would have been easy to bet on emotion and exploit the "human angle" of this historical day. The strength of N30 resides in the fact that DeLaurenti keeps things decent and true, letting the events unfold in your ears, putting you there. Don't worry about emotions; they will get to you just the same, ringing truer and more forcefully."
by François Couture, allmusic.com

If you like N30: Live at the World Trade Organization Protest (SOLD OUT), you may also like:

Bandcamp Daily  your guide to the world of Bandcamp

Little Brother joins the show to discuss their beautiful journey, plus tunes from Fat Tony