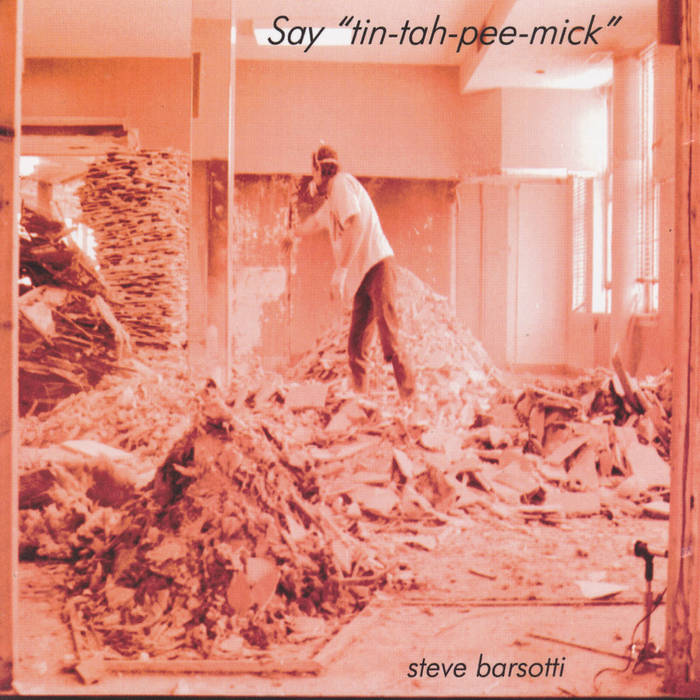 Subtle manipulations of a variety of sound sources including squeaking chairs, impalpable locations and invented instruments. The first two tracks combine improvised elements with existing recordings of disparate locations and ordinary objects. Two live excerpts offer minimal approaches to some of the same material from the studio pieces and explore our auditory perceptive limits by requiring concentrated listening.

Reviews
"Formerly a sound engineer at Chicago 's Experimental Sound Studio, Steve Barsotti is now a sound artist based in Seattle . This CD presents two of his studio works, "noise reduction on back porch" and "tintapemic", and two excerpts from live performances, one from a show entitled "Threshold of Hearing", the other "Threshold of Pain" (which gives you a fair idea what to expect). The two openers are less predictable - on "noise reduction" Barsotti weaves together numerous and diverse field and studio recordings into a heavy tapestry of sound, where in yer face square wave buzzes are intercut with all manner of strange rattles and crackles, as well as more recognisable elements (bird song and the tinkle of a music box). It sounds almost as if it could be improvised - there are quite a few Berliners whose music sounds remarkably similar - but it isn't. In fact Barsotti has been tinkering with this and "tintapemic" for about five years. The second track explores the same territory, Barsotti playing expertly with depth and drama in the mix - close-miked sounds inhabit the same space as distant, echoing crashes - eroding the idea of foreground and background. The two live tracks, entitled "hey" and "HEY" (no prizes for guessing which is loud one) are less successful, but are interesting examples of sound art's increasing preoccupation with positioning itself at one or the other end of the spectrum: it's either noise meltdown or ultra lowercase, Merzbow or López (though one shouldn't forget the latter's spectacular blast of metal a couple of years back). In both categories, there are more interesting offerings than this, though; "hey" can't hold a candle to bernhard günter, and "HEY" is far less exciting than a good old Japanoise brainfry. But as both are extensively sourced from the two other works, it is interesting to hear how Barsotti has reconfigured his composition in a live context. That said, you're likely to return to the sophistication and mystery of "noise reduction" and "tintapemic" in a hurry. Now I know how to pronounce it, Steve, what does "tintapemic" actually mean?" —DW PARIS Transatlantic magazine Review by Dan Warburton


" Sound sculptor, Steve Barsotti, takes field recordings from everyday occurrences, a can opener, chair, heat source and uses a range of reduction practices to amplify their debunked state. He developed the sounds with fellow artists Olivia Block and Tod Szeczyk. What he ends up with is assorted white noise and variable residue minutiae. By playing with the tones of open electricity on "Noise Reduction on Back Porch" he would unnerve any chirping sparrow or cricket into other neighborhoods, it makes my hair stand on end. This random segment lasts for about 1/5 of the piece, but when it ceases it opens new worlds of drone, and relaxes your ability to listen. It's interactive listening, forcing you to endure the good, bad and ugly. If you try to rationalize this you may think Barsotti were visiting a wild boar farm to record veterinarians brushing the hog's teeth. The bristling music concrete drudges up some powdery drone and quietude, landing back in a field as wide as an ocean. "Tintapemic" is made to be a 5.1 Surround Sound piece that extends way out from my headphones, though you can instantly recognize how Barsotti has sculpted an aural experience, rather than straight sound. The scraping, fragmented frequency and other cut-up samples make this disc a stand out track.
"Say "tin-tah-pee-mick is an impassioned sound experiment with Jackson Pollock-like random improv and sonic atmosphere for days. You are in the middle of an air raid at a car dealership, and the only place to hide is within yourself. The piece uniquely crosses ambience with tonal latitude alongside a mix of creaking madness. For the last few minutes it just smolders. Also here are two live performances recorded at Seattle 's Polestar Music Gallery, a luminary somewhat new spot in the Pacific Northwest . The pieces both titled "Hey" (well, one is called "HEY") are excerpts from the Threshold of Hearing/Threshold of Pain series curated by Alex Keller, a music educator interested in the silences of sound technology. The first of the two pieces is quite; all but some extremely fine static electricity are audible. This was without a doubt a chilling challenge to the audience. On "HEY" you can hear the rustling of some very fine objects in the background, silence and then, THUD, static reverb and voila - ignition! The feedback throbs and releases and gives it another go around. This is a contained construction site with an envy of machine guns, but more like those you would find on Xbox than in real time war zones. There's a delectable messiness about this record that is instinctively remote but that can't stop him."
TJ Norris, M I C R O V I E W :: Volume 9

Bandcamp Daily  your guide to the world of Bandcamp

Featured sounds from Fly Lo and Ahmed Idris, plus Mother Nature hops on to drop off new project